Parliamentary Trains specialise in models of the trains that ran in the first few decades of the British railway system, a fascinating and so far largely neglected era with much to offer the modeller.

To date, we have concentrated on 0 gauge models of the London & Birmingham Railway, together with the early years of the London & North Western Railway (LNWR) as these are the companies we are familiar with. However, we are now expanding into other gauges,  railway companies and countries! If you have a favourite company and would be interested in their early stock, let us know.

Not enough space for 0 Gauge?

Trains from the early days of the railways  typically had short wheel bases, which make them suitable for those wishing to model in 0 Gauge who are restricted by not having a great deal of space. Carriages were diminutive in comparison with those of today; a model of an 1840s express might not even be six feet long in 0 Gauge, and be capable of taking two foot radius curves on the layout! (1.8m and 0.6m in metric……)

The trains of this period tended to be made up of a mixed bag of carriages and wagons of different shapes and sizes - a far cry from the monotony of some later periods.

Although models of this early era are unlikely to justify mass-production methods, by using  a variety of materials old and new together with some of the latest production processes, Parliamentary Trains can carry out rapid test builds and speedily correct errors, and keep prices competitive even with short production runs, which we can  repeat quickly.

And it’s not all about railways! 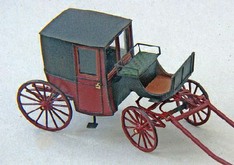 Left to right - Cattle Wagon, a pair of Timber Bolsters, Covered Van, Open Wagon and a ‘Break Van’ - all Henson designs from the early days of the London & Birmingham Railway 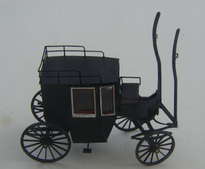